The Teamlead Development Program at Smarter E-Commerce was launched in early 2019 to ensure that new leaders arrive in their new role in the best possible way. Today, MDI Consultant Cathrin Leßlhumer presents in a short consulting case study how MDI successfully masters new challenges together with customers and how programs are optimally tailored to their needs.

Initial situation at the beginning of 2019

How it all began – the request from smec (Smarter Ecommerce) came through recommendation from another customer. The company had undertaken an internal restructuring at the beginning of 2019 and at the same time planned to expand business, which resulted in a number of new team leads. We at MDI responded to the request with great interest, as junior managers, and especially those in such large numbers, represent an exciting project for MDI to support.

The already mentioned internal restructuring, expansion plans and a further step in the direction of distributed responsibility have prompted smec to offer a development program for the new teamleads. Another important aspect was also to bring the “newcomers” together as a group and to provide a corresponding space for exchange as preparation and accompaniment for the role. The “WHY” for the program on the part of the customer was very clear for us as the accompanying exporter and also an open exchange about the Painpoints and where MDI wants to make a difference was given from the beginning!

With enquiries like these, it is of course important for us to find a good match between customer needs and our expertise, so it was important for us to follow the Kirkpatrick approach and to clarify first where the company wants to go and accordingly where the development of the new teamleads should head to.

For smec it was important to prepare the “newcomers”, some of whom were previously employees, or people who were new to the company, for the upcoming activities and expectations of the heads of the different departments. Topics such as “from employee to manager”, communication (with employees and with other managers), distribution of responsibilities within the team, personal awareness of the new role and feedback should be reflected in the Team Lead Programme. 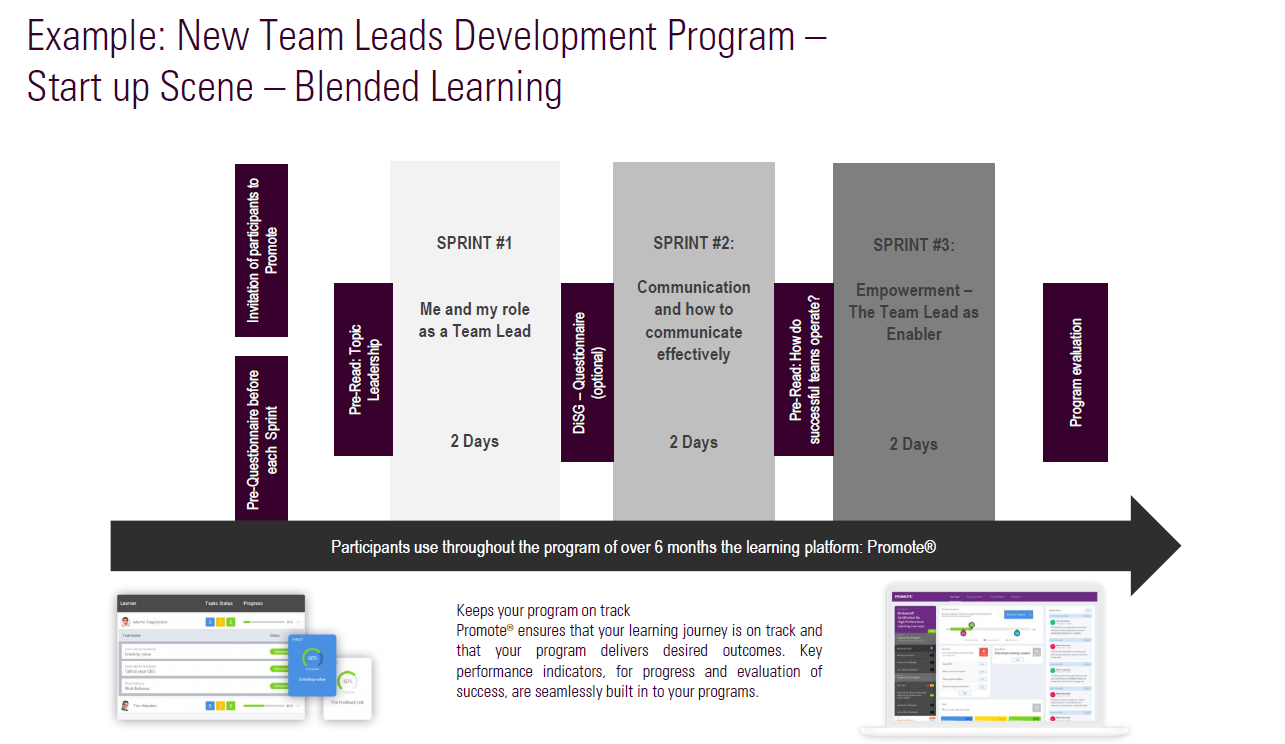 The programme was conducted as part of a larger project focusing on management skills. Our Teamleads Development Program was carried out in three sprints and was accompanied throughout by the learning transfer platform Promote. For the group of 19 teamleads, the trainer team Christina Sunder-Plassmann and Anton Chung was on duty for the respective sprints and could therefore guarantee a continuous professional support.

Every sprint was evaluated afterwards with a feedback survey and after the whole program was finished there was also a call between the management and the HR responsible of smec, the trainers and us as MDI. The retrospective measures are particularly useful for reflecting on the shared experience and for looking at what really went well and what should be considered when further action is to be taken. Only in this way can learning take place for all participants and be made possible in the same way.

It was also a special pleasure to see how active the team leads were on the learning transfer platform Promote. On the one hand, this was used to collect expectations for the individual sprints in advance, but also to actively promote exchange in smaller groups and how what was learned in the sprint was applied in everyday work. The participants made an excellent contribution and were thus able to shape their own learning progress on the platform.

For our first collaboration, we would consider the joint project a great success and look forward to further opportunities for new learning experiences.

Dubai, Madrid and soon Bangkok – around the world with MDI

our L&D Consultants Marina Begic, Nicole Altenberger and Alina Helmlinger have experienced quite a bit over the past few months. Here they describe how it all came about, what exactly they did there, and what's awaiting next for them...Dubai, Madrid and soon...
Read More

Learning in the agile age: waterfall or cycle?

What is the reality of learning in large companies today? We often see in a wide variety of companies that there is a department that is single-handedly responsible for designing training programs, then planning them through from A to Z in advance, with a strong focus...
Read More

The 3 P's - The 3 success factors of hybrid leadership Basically, the concept of leadership in a hybrid set-up can be broken down to 3 main factors: Purpose, People and Performance. Each of these factors is an important piece of the puzzle that allows us to work...
Read More

The 3 biggest challenges of hybrid work

by Statements from the personaList community | 27. May 2022 | Customer Story, Digital Transformation, Leadership in the digital transformation | 0 Comments

Next Work Monopoly - Playfully design your new workplace culture In recent years, the world of work has steadily evolved from static office workplaces to more flexible work options, and the effects of the last year have made this transformation even more rapid. Due to...
Read More

The effects of home office

10 agile ways to promote organizational learning. In order to respond to the current challenges in an organization in the best possible way, different learning formats have proven to be strongly supportive in terms of implementation. These enable new knowledge to be...
Read More

What does the future of agile Leadership Development look like? MDI CEO Gunther Fürstberger has answers and shows you five helpful Characteristics. In the past, leadership development was mainly carried out in the classic mindset of project management. To achieve...
Read More