Incredible 40 billion Lego bricks are said to exist in the world. After they conquered the hearts of many children, the small colorful stones are now conquering the seminar rooms in the management & development industry. We wanted to experience this method ourselves. Therefore we had a Lego Serious Play workshop, where we asked ourselves: What will MDI look like in 2025?

Goal: First of all, we are always looking for new agile methods and wanted to experience this one as well. Furthermore, we wanted to find a common vision for MDI in 2025.

Think with your hands

This is basically the only rule in Lego Serious Play, wherefore it is unstoppable that all participants are starting to build once the little bricks are spread out on the table. But that’s not a problem at all, as Lego Serious Play is not about thinking and planning for a long time, it’s just about doing it.

While our facilitator has given an overview of the method and different fields of application, we have already developed the first buildings within a team. In addition to the intuitive and unstoppable building, we also had some warm-up exercises, with questions such as: What motivates you in your daily work? 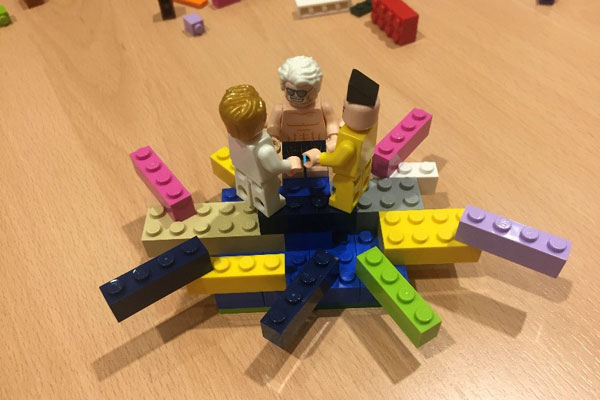 „It motivates me that we are a team many different characters with different tasks. Nevertheless, we have one important thing in common: we all work at MDI. The cooperation with my colleagues and the helpfulness within the team motivates me every day. ” (Judith, Marketing)

„While building my model, I realized that I do not have a strict division between my professional and personal life. All my different activities and roles in life are symbolized by the different branches in my model. Having the ability to flexibly move around on those branches and combining one with the other motivates me tremendously.” (Julia, Marketing) 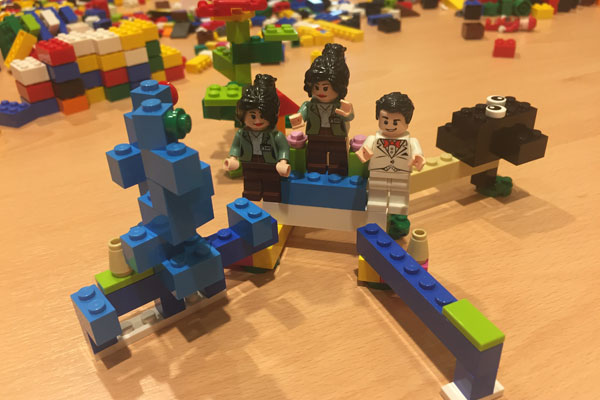 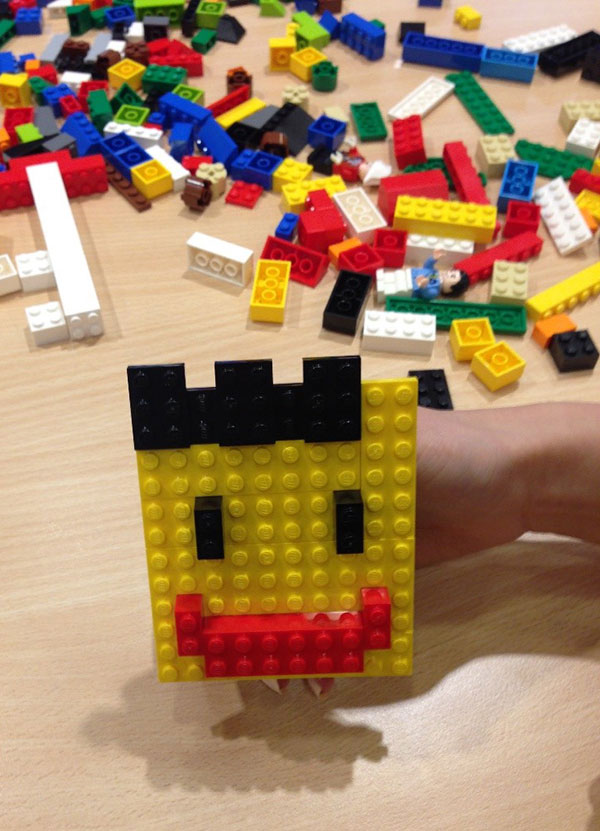 “When my colleague asked me what motivates me in my job, I shaped a smiley. I think it’s important to be able to laugh a lot, no matter how serious life is. I don’t miss that at MDI. There is a lot of laughter and fun in my work environment, and that is something that motivates me to go to work! Apart from the good mood in the office, we have a great relationship with our clients and coaches! This atmosphere motivates me a lot.”(Valmire, Junior Training & Development Consultant)

Since no specific know-how or skills are necessarily needed to work with Lego Serious Play, we came straight to the point fairly quickly: What will MDI look like in 2025?

In order to obtain different results here, we have divided our team into three groups according to their functions: Consulting, Project Management, and Solution Development together with Marketing. What was the concrete task? Everyone had to build their own vision first. Afterwards, the individual versions were assembled on a large board and supplemented or shortened.

The unstoppable euphoria about building new things has temporarily paused here because the question was complex and we wanted to take some time to think about it. But after a few minutes, all three team tables (Consulting, Project Management, and Marketing + Solution Development) were already starting to build their ideas and visions.

The ideas and discussion

After 20 minutes, it was time to introduce our future visions to each other. What we quickly noticed was, that new ideas were coming to light – even though we didn’t have a lot of time. The models we built, were the ideal starting point for discussions. We did not only discuss the models within the whole MDI team but also within the small groups and departments.

But what are the next steps for now?

We brought the Lego structures of “MDI in 2025” of all the teams to our office so that the ideas, we collected during the workshop, would not be forgotten. In the next few weeks and months, we will see which ideas will be implemented. However, it is already clear that we did not only get to know another agile method but also gathered many new ideas and motivation for future projects, through this workshop.

FAST FACTS ABOUT THE TOPIC

In which areas can Lego Serious Play be used?

Development Approaches: Leading a business through the digital transformation

Modern technologies have changed our working conditions. Digitalization has become the number one leadership challenge. Therefore many leaders are facing the question, how to successfully lead their organization through the digital transformation. But what are the consequences of the digital revolution for leaders? And what do you need as an agile leader in this digital times?

OKR, Kanban, Scrum, Design Thinking, Management 3.0, Lean Management…the list of tools and concepts around agile leadership is long and somehow it seems that everybody is talking about it. Alexandra Sock is a trainer at MDI expert when it comes to agile leadership. In this video, she gives you a short overview of agile leadership and the different methods.

MDI implemented the OKR (Objectives and Key Results) method in the beginning of 2017. Gunther Fürstberger, CEO if MDI, gives us some insights about the method and its implementation. What were the challenges in the beginning? How does the method work and what’s the difference to other goal management methods?